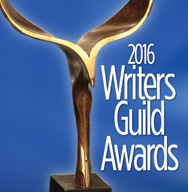 Further inquiries regarding the WGA Documentary Screenplay Award may be directed to Dana Weissman in the WGAE Awards Office at (212) 767-7835, email: dweissman@wgaeast.org or to Jennifer Burt in the WGAW Awards Office at (323) 782-4569, email: jburt@wga.org.

The Writers Guild Awards honor outstanding writing in film, television, new media, videogames, news, radio, promotional, and graphic animation categories. The awards will be presented jointly at simultaneous ceremonies on Saturday, February 13, 2016, in New York City at the Edison Ballroom and in Los Angeles at the Hyatt Regency Century Plaza. For more information about the 2016 Writers Guild Awards, please visit www.wgaeast.org or www.wga.org.