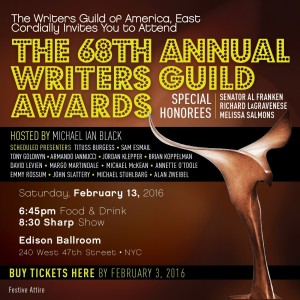 NEW YORK, NY (January 8, 2016) – The Writers Guild of America, East (WGAE) today announced that Melissa Salmons will be honored with the Richard B. Jablow Award at the 68th annual Writers Guild Awards at the Edison Ballroom in New York City on February 13, 2016.

The Jablow award was established in 1978 to recognize devoted service to the Guild. It was created in honor of Richard B. Jablow, who helped found the WGAE, authored its constitution and served as its first counsel.

A Guild member since 1986, Melissa is a two-time Daytime Emmy Award-winning writer for GUIDING LIGHT and AS THE WORLD TURNS. She has won four Writers Guild Awards and received another eleven nominations.

Melissa was elected to two terms on the WGAE’s council and has served on multiple committees, including the MBA negotiating committee, the elections committee and co-chair of the future members committee. She is currently a trustee of the Writers’ Guild-Industry Health Fund and the Producer-Writers Guild of America Pension Plan.

At the New York ceremony, Senator Al Franken will be presented with the Evelyn F. Burkey Award for bringing honor and dignity to writers and Richard LaGravenese will be honored with the Ian McClellan Hunter Award for career achievement.

The 2016 Writers Guild Awards New York Ceremony will be hosted by Michael Ian Black and are sponsored by WNYC and Bananagrams.

The Writers Guild Awards honor outstanding writing in film, television, new media, videogames, news, radio, promotional, and graphic animation categories. All competitive awards will be presented at both the New York ceremony at the Edison Ballroom and the Los Angeles ceremony at the Hyatt Regency Century Plaza. The New York and Los Angeles ceremonies take place concurrently on February 13, 2016.