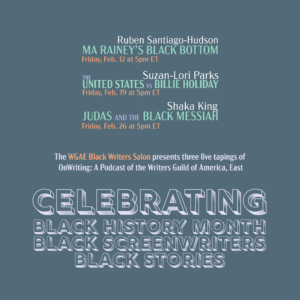 In honor of Black History Month, please join the WGAE Black Writers Salon at a series of live-tapings of OnWriting: A Podcast of the Writers Guild of America, East with three esteemed Black screenwriters – Ruben Santiago-Hudson, Suzan-Lori Parks, and Shaka King – who all have excellent new films about Black icons.

Here’s the line-up and link to RSVP:

Suzan-Lori Parks is a Pulitzer Prize-winning playwright and screenwriter for the forthcoming film, THE UNITED STATES VS. BILLIE HOLIDAY, adapted from Chasing the Scream: The First and Last Days of the War on Drugs by Johann Hari. This film, directed by Lee Daniels, follows Holiday (Andra Day) during her career as she is targeted by the Federal Department of Narcotics with an undercover sting operation led by black Federal Agent Jimmy Fletcher (Trevante Rhodes), with whom she had a tumultuous affair.

Shaka King is the co-writer and director of JUDAS AND THE BLACK MESSIAH. The film’s screenplay is by Will Berson & Shaka King; story by Will Berson, Shaka King, Kenny Lucas, and Keith Lucas. JUDAS AND THE BLACK MESSIAH is the incredible story of Fred Hampton (Daniel Kaluuya), Chairman of the Illinois Black Panther Party, and his fateful betrayal by FBI informant William O’Neal (LaKeith Stanfield).

If you are a WGAE member interested in joining the WGAE Black Writers Salon, please email bfryer@wgaeast.org.