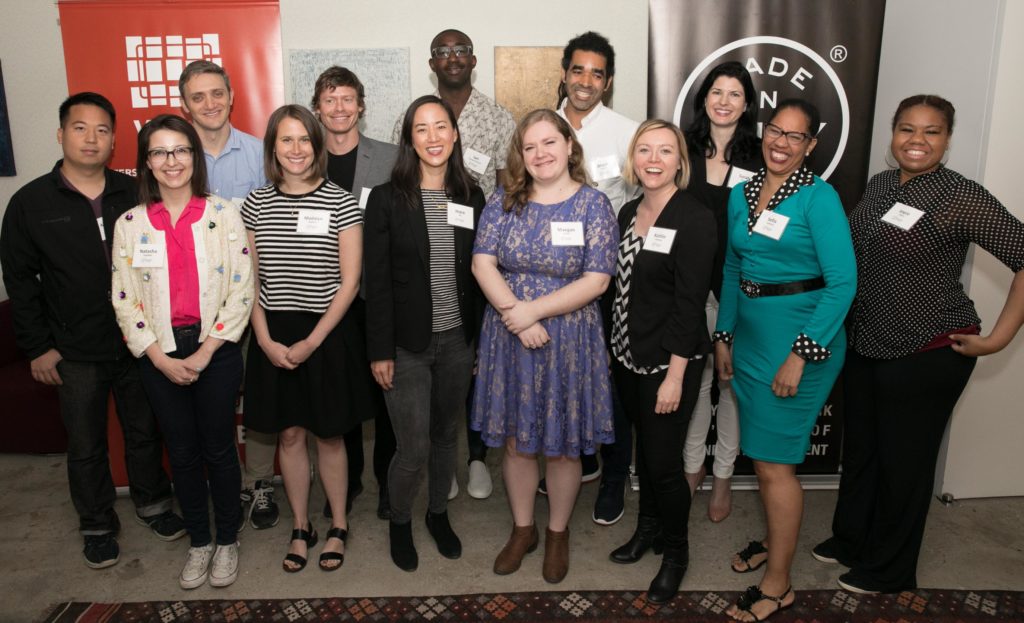 NEW YORK, NY — The inaugural Made in NY Writers Room fellowship class was announced today, marking a major milestone in an innovative program to develop diverse writing talent in New York City’s entertainment industry. The twelve fellows – whose scripts for television pilot episodes were selected from a competitive pool of nearly 500 entries – will each be paired with a mentor to develop a work plan to get their submitted pilot pitch-ready. As part of the six-month fellowship, they will also have the opportunity to attend a variety of professional development events and workshops.

The Mayor’s Office of Media and Entertainment (MOME), the NYC Department of Small Business Services (SBS), and the Writers Guild of America, East (WGAE) shared the news at a launch event at The New School’s John L. Tishman Auditorium. The event also featured staged readings of the top-scoring comedy and drama scripts.

“Production is booming in New York and there are more opportunities for talented writers than ever,” said Mayor’s Office of Media and Entertainment Commissioner Julie Menin. “What’s so great about the Made in NY Writers Room is that it provides writers from diverse backgrounds with access to these opportunities. It ensures that their stories are told and that the television shows we watch reflect the rich diversity of our city. We’re so proud of the talented writing fellows who were selected and thankful to the rock-star mentors who’ve graciously participated in this groundbreaking program.”

“The Guild’s partnership with the City will increase opportunities for diverse New Yorkers to build careers, enhancing their reach in the industry and, we hope, their exposure to people who make decisions about what shows get produced,” said Lowell Peterson, Executive Director of the Writers Guild of America, East. “We know that diverse writers in New York possess enormous talent, and this project will empower them to apply that talent and to create compelling television. “

“The entertainment industry is an essential part of New York City’s identity, and it’s important that it reflects the diverse voices and talents of all New Yorkers,” said Gregg Bishop, Commissioner of the NYC Department of Small Business Services. “As every New Yorker knows, if you can make it here, you can make it anywhere, and this fellowship program is helping more people have a shot at their big break.”

The Made in NY Writers Room program officially opened for submissions in September of 2016, aimed at supporting writers from diverse backgrounds and perspectives in New York City, and amplifying their voices in the entertainment industry. The program also seeks to increase the number of television productions written in New York City, which has not kept pace with the record number of series now filmed in the five boroughs. The call for submissions attracted an impressive collection of scripts. Each applicant in the first round received notes from two WGAE members with television credits – an unmatched opportunity for early-career writers. There were 170 pilots that qualified for an additional round of feedback, before 30 finalists were selected.

Submissions came from a wide pool of talent, including members of the WGAE, the WGAE Diversity Coalition, alumni of the Ghetto Film School, Tribeca All-Access Program, NALIP (National Association of Latino Independent Producers), or by recommendation of New York Women in Film and Television, the Alliance for Inclusion in the Arts, Asian CineVision, the Blackhouse Foundation, the Black Filmmakers Foundation, the Black List, a member of the Interguild Diversity Coalition, ColorCreative, the TV Writers Studio at Long Island University’s Brooklyn Campus, Columbia University Graduate Film Program, Upright Citizens Brigade Theater or Diversity Program, or the NYU Tisch School of the Arts Film and Television program.

Scripted television production is booming in New York City: a record-breaking 52 series were filmed here during the 2015-16 season, with surging growth in the industry driven by the proliferation of networks and platforms commissioning scripted content. While this unprecedented volume creates immense opportunities, the prospects for women, people of color, and those whose voices and stories are underrepresented who are interested in writing for television, are more limited. A recent study by the WGA West analyzing entertainment industry employment data through 2014 shows the share of television employment of minority writers was 13 percent, while women writers made up 29 percent of the workforce. Given these numbers, creating opportunities for writers of diverse backgrounds helps foster a more inclusive environment both on set and on camera and one that is more reflective of our diverse society.

After the fellowship announcement was complete, the gathered audience enjoyed a staged reading of the top-scoring comedy script, FILTHY LIAR, by finalist Gemma Burgess, and drama script, GREATER HEIGHTS, by fellow Ian Olympio-Nyanin.

The readings were cast by Caroline Sinclair Casting and co-directed by each writer and Timothy Michael Cooper.

About the Mayor’s Office of Media and Entertainment
The Mayor’s Office of Media and Entertainment encompasses the key economic and creative sectors of film, TV, theater, music, advertising, publishing, digital content and real estate as it relates to these industries. In total, these sectors account for over 305,000 jobs, and an economic output of $104 billion. The office promotes New York City as a thriving center of creativity, issuing permits for productions filming on public property, and facilitating production throughout the five boroughs. It also oversees NYC Media, the largest municipal broadcasting entity in the country including five TV Stations and a radio station with a reach of 18 million households in a 50-mile radius.