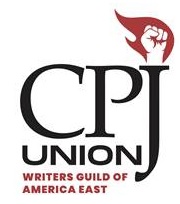 NEW YORK, NY (JULY 17, 2019)—The employees of the Committee to Protect Journalists (CPJ) today announced they have unionized with the Writers Guild of America, East (WGAE). More than 90% of the 30-member staff signed union cards and management agreed to voluntarily recognize the Guild as its collective bargaining representative.

In 2009, the Committee to Protect Journalists was awarded the Writers Guild of America, East’s Evelyn F. Burkey Award, which recognizes a person or an organization “whose contributions have brought honor and dignity to writers everywhere.” Through its in-depth reporting, analysis and advocacy work, the Committee to Protect Journalists has been at the center of the fight to defend freedom of the press around the world. It has brought international attention to journalists who have been threatened, held captive or murdered in the line of duty.

Lowell Peterson, Executive Director of the Writers Guild of America, East, said, “We are honored to represent people who devote their professional lives to protecting journalists, to telling the stories of journalists who do important and difficult work in perilous times.  We look forward to continuing our strong, productive relationship with CPJ.”

Joel Simon, Executive Director of the Committee to Protect Journalists, said, “The CPJ staff is tremendously effective, and as leaders of this organization we are proud of the work they do to advance press freedom and defend the rights of journalists. We look forward to working with the union to make CPJ the best possible place to work.”

The staff of the Committee to Protect Journalists are excited to announce that we are unionizing with the Writers Guild of America, East.

Since 1981, CPJ has been a leading global voice on behalf of press freedom, defending the right of journalists around the world to report the news safely and without fear of reprisal. We all believe wholeheartedly in this mission and are humbled and honored to work with the courageous journalists we have the privilege to support, as well as our committed colleagues, who bring passion, expertise and empathy to this important work.

In the past few years, CPJ has grown significantly in all areas: budget, staff and consultants, global reach, visibility and scope of projects. As we continue to expand and adapt in response to evolving threats to press freedom around the world, we want to ensure that our internal structures can do the same. Through union representation we can strengthen our workplace culture and ensure that all staff–from longtime employees to new hires–have the necessary support and protection to carry out CPJ’s mission.

We are proud to work at an organization that has taken steps to provide comprehensive benefits for its staff and are confident that CPJ leadership is committed to staff wellbeing. With that in mind, we look forward to collaborating with management on issues including equitable and transparent compensation structures; fair hiring, disciplinary, and termination practices; staff input in decision making; and fostering a diverse and inclusive workplace.

Unions have long played a fundamental role in ensuring accountability within the workplace. As an organization that prides itself on holding states and institutions around the world accountable, it is in keeping with our values to stand in solidarity with the unions that are advocating for journalists and newsrooms around the world, and to add our own voices to that call.

We look forward to the successful completion of the collective bargaining process and anticipate that this new structure for representation in the workplace will help our staff work even more effectively to advance CPJ’s critical mission.