iHeartPodcast Network Unionize with the Writers Guild of America, East 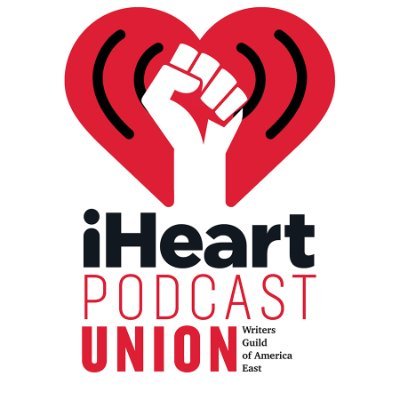 NEW YORK, NY (December 9, 2021) – A clear majority of the iHeartPodcast Network, the fastest growing division of iHeartMedia, signed union cards to organize with the Writers Guild of America, East (WGAE). The Guild has called on management to voluntarily recognize the union.

The approximately 125-member iHeartPodcast Network Bargaining Committee includes producers, editors, researchers, writers, and hosts based in Atlanta, Los Angeles and New York CIty. The iHeartPodcast Network includes hit series like “Stuff You Should Know,” “Fake Doctors, Real Friends,” “The Ron Burgundy Podcast,” “Disgraceland,” “Chelsea Handler: Life will be the Death of Me,” “Noble Blood” and “Committed,” among many others.

In a “Why We’re Organizing” letter to management, the iHeartPodcast Organizing Committee wrote:

We, the podcast producers, editors, researchers, writers, and hosts of iHeartMedia, are thrilled to announce that we are unionizing with the Writers Guild of America, East. Months of discussion with our colleagues have clarified some things: First, we love the community we have created at iHeart. We work shoulder to shoulder with some of the most creative minds in the business, who have come to feel more like family. We are devoted and passionate storytellers who take pride in our ability to provide our listeners with entertaining, thought-provoking audio content and, most importantly, companionship.

However, during difficult times, we are reminded that while the iHeart Digital Audio Group prides itself on its relative autonomy and ability to adapt to the shifting needs of the marketplace—much like a start-up—we work under the capacity constraints of a legacy broadcast conglomerate. Essentially, we have been encouraged to embrace the dynamism of start-up culture without any of the associated benefits.

Throughout the unprecedented challenges of the last two years, we managed to seamlessly transition to remote work; our adaptability helped the company not just sustain, but thrive during a period of economic uncertainty and social unrest. During team calls, town halls, and official email communications from leadership, we are frequently reminded of the financial gains that we helped make possible. Bob Pittman, CEO and Chairman of iHeartMedia, reported during last month’s quarterly earnings call that Digital Audio revenue increased by 77 percent compared to 2020. Our division’s significant growth was “driven primarily by continuing increases in demand for digital advertising and the continued growth of podcasting,” where revenue is up 184 percent compared to 2020.

Unfortunately, those gains have not reached the creators working round-the-clock to keep our audience of more than 30 million monthly listeners actively engaged. With hundreds of shows across all categories and genres, many of us are doing the work of multiple employees, and the huge volume of content we are responsible for is not met with equitable compensation. Furthermore, we lack transparency in workplace decision making, meaningful initiatives toward diversity and inclusion, fairness in managerial relationships, and clarity in divisions of labor. While we are proud to be an essential part of iHeartMedia’s success over the past few years, we are keenly aware of significant internal pay disparities between similarly positioned individuals within the company. And across the board, iHeartMedia’s overall compensation and benefits standards are wholly insufficient when compared to the greater podcast and scripted audio market.

Due to these working conditions, the creators of iHeart’s podcasts have banded together in order to help determine the best path forward so that iHeart can remain competitive, retain existing talent, and attract new voices to the network, all while creating a more equitable, transparent, and democratic workplace. Key elements of these goals include, but are not limited to:

We ask that iHeart leadership voluntarily recognize our union, and we look forward to working with our company’s leadership throughout the bargaining process to reach these objectives. In doing so, we can ensure that iHeart’s growth remains sustainable and that we retain our position as an industry leader.

Lowell Peterson, Executive Director of the Writers Guild of America, East, added, “We are pleased to welcome the storytellers at the iHeartPodcast Network to the Guild. A union is vital to  ensuring podcast workers are able to build sustainable careers in an industry where their contributions have been essential to the sector’s continued rapid growth.”

In addition to the iHeartRadio Podcast Network, the WGAE represents workers at podcast production companies Gimlet Media, The Ringer and Parcast, all of which were voluntarily recognized by owners Spotify. Gimlet and The Ringer ratified their first collective bargaining agreement earlier this year, and Parcast is currently negotiating their first contract.