The Writer-Director of HAIRSPRAY, SERIAL MOM and PECKER to be honored with the Writers Guild of America, East’s Ian McLellan Hunter Award 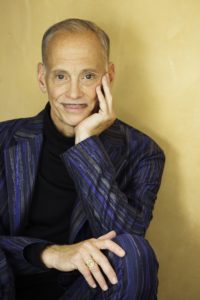 The Ian McLellan Hunter Award was established in 1992 and named in memory of longtime WGAE member Ian McLellan Hunter. The award is presented to a WGA member in honor of his/her body of work as a writer in motion pictures or television.

Waters reacted to the honor by noting that “Decades ago, a critic once wrote that my screenplays ‘were merely clotheslines to hang out my dirty wash’.  I’m glad the WGAE disagrees – or maybe they DO agree, who knows?  Either way, I couldn’t be more honored and excited to get this award.”

Presenting the Hunter Award to Waters will be his fellow Baltimoreon David Simon, who was previously honored with the Hunter Award for his work on THE WIRE, TREME and HOMICIDE: LIFE ON THE STREET.

“The metropolis of Baltimore, Maryland contains multitudes: The stolid rowhouse folk of Mencken’s HEATHEN DAYS; the post-yiddishe wit of Barry Levinson’s assimilating DINER guys; Anne Tyler’s hermetic yet idiosyncratic ROLAND PARK; Laura Lippman’s crime narratives of Bawlmer women and their carried secrets; THE WIRE’s inverse economies of the city’s poorest and most vulnerable. Good, bad and all points in between. But only John Waters has made being not right, not normal, not ordinary, nor expected seem so, well, Baltimore,” said Simon. “Time and again, on film and in prose and eventually on Broadway, he has celebrated the very American notion that there is, in fact, no normal. That we are all, if we are honest, at least two standard deviations from the mean.  In Baltimore, it is our goddamn birthright. I’ve shared my crew with this man. I’ve shared some cast, at points. I’ve shared some meals and jokes and the very real benefit of his having been a pioneer for a film community that has punched well beyond its weight class. But most of all, like damn near every Baltimorean, I am proud that I share a city with this fine storyteller.”

The Hunter Award has been bestowed upon a diverse group of celebrated writers whose work spans a variety of genres. Andrew Bergman, John Sayles, Ruth Prawer Jhabvala, Richard LaGravenese, John Patrick Shanley, Claire Labine and Nora Ephron have all accepted the Hunter Award. Even in this crowd, Waters stands out for the joyful eccentricities of his screenplays.

Born in Baltimore, Maryland in 1946, Waters began making 8-mm underground movies as a teenager. From the very beginning, it was evident that Waters was capable of creating grand stories that turned outsiders into stars and eccentrics into heroes. Waters wrote characters that would normally never be seen or heard on film.  Actors like Divine and Mink Stole tore apart social norms in films like 1967’s EAT YOUR MAKEUP, which told the story of a deranged governess and her lover who kidnap fashion models and force them to model themselves to death.

In 1972, Waters wrote and directed what would become the most “notorious” film in the American independent cinema of the 1970’s, PINK FLAMINGOS.  Centered on the great battle to secure the title “Filthiest People Alive,” PINK FLAMINGOS pitted Divine’s “Babs Johnson” against Mink Stole and David Lochary’s truly evil “Connie and Raymond Marble.” PINK FLAMINGOS went on to become a smash success at midnight screenings in the U.S. and all over the world, turning Waters into a cult celebrity.

Waters followed the success of PINK FLAMINGOS with 1974’s FEMALE TROUBLE, 1977’s DESPERATE LIVING and 1981’s POLYESTER, a wide-screen comic melodrama filmed in glorious “Odorama,” in which audiences were given scratch ‘n’ sniff cards that allowed them to smell along with the characters in their fragrant search for romantic happiness.

Where PINK FLAMINGOS left audiences speechless, 1988’s HAIRSPRAY got audiences dancing and critics applauding. A box office hit, the film’s message of acceptance continues to endure and influence. The film has been turned into a Tony Award-winning Broadway musical, been remade for the big screen with John Travolta taking over Divine’s role of Edna Turnblad and last week NBC aired HAIRSPRAY LIVE!, a one-time only live television family-friendly spectacle.

Even as HAIRSPRAY brought Waters mainstream attention and major studio budgets, he continued to write stories that celebrated the others, the delinquents and the deranged. In 1990’s CRY-BABY, Johnny Depp starred as a greaser prone to keeping his tears in a jar and his pants below the knees. In 1994’s SERIAL MOM, Kathleen Turner played an unredeeming serial killer for comedy. SERIAL MOM was the closing night attraction at that year’s Cannes Film Festival.

1998’s PECKER, which starred Edward Furlong and Christina Ricci, was a feel-good movie about lesbian strippers, pubic-hair harassment and amateur photography. 2000’s CECIL B. DEMENTED starred Stephen Dorff as a lunatic film director who led a gang of film cultists to kidnap Melanie Griffith and force her to act in their own Super 8 underground movie.

His last original feature film to date was 2004’s A DIRTY SHAME, a comedy about a repressed, middle-aged woman who falls into an underground subculture of sex addicts in suburban Baltimore.

The 2017 Writers Guild Awards New York show will be hosted by Lewis Black.

The New York ceremony is sponsored by Vision Media Management and Elite Logistics and Fulfillment. The media sponsor is Crain’s New York.