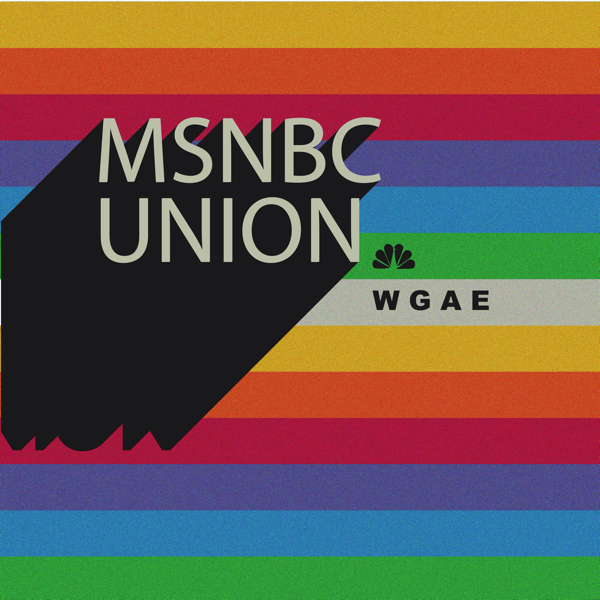 NEW YORK, NY (JUNE 17, 2021) – The newsroom employees at MSNBC and The Choice on Peacock today announced they unionized with the Writers Guild of America, East (WGAE) for the purpose of collective bargaining.

The 315-member bargaining unit includes writers, producers, booking producers, fact checkers, and planners at every program airing on MSNBC and The Choice on Peacock. A clear majority of staff signed a letter to management calling for voluntary recognition of the union.

The MSNBC bargaining unit shared the following message explaining their decision to unionize:

We are the dedicated editorial staff of MSNBC. We are writers, producers, booking producers, fact checkers, and planners. We are committed journalists who strive every day to meet the demands of an increasingly unpredictable news environment, while maintaining the high standard of informative, edifying, and entertaining content our audience has come to expect of us. We are the ones who wake up early and stay up late to bring you the news as it happens with context and clarity. We know our contributions have earned us a seat at the table where we can advocate for a safe and fair workplace. We know our voices are key to making MSNBC the best news network it can be for both its audience and its workers. That’s why we have organized to be a part of the Writers Guild of America, East (WGAE).

An overwhelming majority of our coworkers at MSNBC have signed a petition for union recognition to join over 7,000 members of the WGAE, which includes thousands of journalists working in cable, broadcast, and digital media. At a time when journalists and journalism itself are under siege, we want to join our peers who have paved the road before us in standing up for our rights. We are calling on the network to recognize our union and we are looking forward to constructive negotiations over the issues that are important to all of us.

Lowell Peterson, Executive Director of the Writers Guild of America, East, said, “We are proud that the hard-working newsroom employees at MSNBC decided to unionize with the WGAE. They join thousands of their colleagues in the news and entertainment industries who recognize that collective bargaining is the most effective way to win a voice at work and to build sustainable careers. We hope and expect MSNBC to remain true to its commitment to progressive values by respecting its employees’ decision and recognizing our union promptly.”