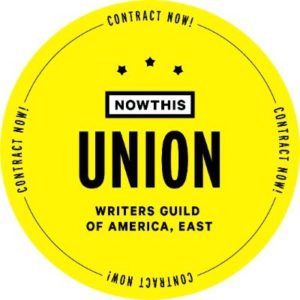 The 65-member NowThis bargaining unit will see an average raise of 9% in the first year of the agreement, with the lowest-tiered employees receiving a minimum salary of $62,000 by the end of the two-year term.

All employees will receive a ratification bonus of $3,400 to recognize increased costs when NowThis moves to Vox’s health insurance plan in 2023, the switch to unlimited PTO, and the costs of work-from-home equipment.

The agreement guarantees essential leave and benefit policies for members, including providing five months of parental leave and requiring the development of a critical health care policy that extends to abortion access and gender-affirming care.

The contract also includes a commitment that at least 60% of job candidates interviewed come from groups underrepresented at NowThis, the highest percentage in the industry, and eradicates the use of employee non-disclosure agreements in cases of harassment or discrimination.

Further, the deal ensures that bargaining unit employees can only be disciplined or fired with just cause, guarantees continued work-from-home flexibility, and requires any new owner to abide by the terms of the contract.

The NowThis bargaining committee said, “The journey to our first collective bargaining agreement wasn’t easy, but we couldn’t be more thrilled with everything we won. As we’ve said from the beginning, we organized not out of anger, but out of love — love for NowThis’ progressive values, love for the stories we tell, and love for our colleagues. We truly believe this deal not only ensures our unit members receive the wages and benefits they deserve, but also reflects the values that NowThis champions every day.”

Lowell Peterson, Executive Director of the Writers Guild of America, East, added, “Organizing and negotiating a first contract takes hard work and a willingness to take risks, but they won a great contract. We are pleased by the great terms our members have won at NowThis.”

ABOUT WRITERS GUILD OF AMERICA, EAST
The Writers Guild of America, East, AFL-CIO (WGAE) is a labor union representing writers in film, television, broadcast and streaming news, and online media. The Guild negotiates and administers contracts that protect the creative and economic rights of its members; conducts programs, seminars and events on issues of interest to writers; and presents writers’ views to various bodies of government. For more information on the Writers Guild of America, East, visit wgaeast.org.