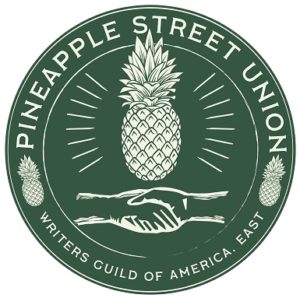 NEW YORK, NY (November 16, 2022) – Pineapple Street Studios, the popular podcast network owned by Audacy, formally recognized the Writers Guild of America, East (WGAE) as the collective bargaining representatives of the staff’s writers, producers, editors, engineers, and other storytellers. A card-check conducted by an independent third-party confirmed that a majority of the 42-member bargaining unit signed union cards in favor of the union.

The Pineapple Street Union said, “We are so proud to have won voluntary recognition from management at Pineapple and Audacy. This victory is a direct result of months of hard work and dedication to building solidarity across our organization. We’re excited to carry this momentum forward into a collaborative bargaining phase, focused on pay and protections, accountability, consistency and unity at the company. We’re very pleased that Pineapple and Audacy have moved quickly and respectfully in this voluntary recognition process. We hope that this not only sets the tone for our upcoming bargaining process, but also sets an example for leaders across our industry – that working with employees to achieve more equitable workplaces can and should be a collaborative and straightforward experience on both sides of the table. We stand in solidarity with other producers, editors, writers, engineers, and staff across the industry in the continued effort to make audio a more fair and equitable field.”

The union aims to begin negotiations with Pineapple Street Studios and Audacy as soon as possible. Last month, when the unionization effort was announced, the shop wrote a “Why We’re Organizing” letter that outlined many of the key issues it planned to negotiate over including pay equity and transparency, severance and leave policies, improved health insurance, remote work security, IP rights, and assurances for interns and contractors.

Pineapple Street Studios produces hit podcasts like “Will Be Wild,” “The Catch and Kill Podcast with Ronan Farrow,” “And Just Like That… The Writers Room,” “Missing Richard Simmons,” “Stay Tuned with Preet,” “Wind of Change,” “Behind the Scenes: Stranger Things,” and “Still Processing.”

Pineapple Street Union can be found on Twitter at twitter.com/pineapple_union.

ABOUT THE WRITERS GUILD OF AMERICA, EAST
The Writers Guild of America, East, AFL-CIO (WGAE) is a labor union representing writers in film, television, broadcast and streaming news, podcasts, and online media. The Guild negotiates and administers contracts that protect the creative and economic rights of its members; conducts programs, seminars and events on issues of interest to writers; and presents writers’ views to various bodies of government. For more information on the Writers Guild of America, East, visit wgaeast.org.