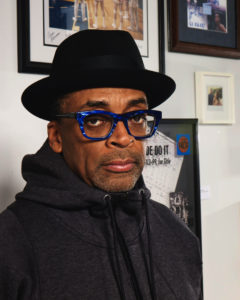 NEW YORK, NY – One of the greatest writer/directors in film history, Spike Lee will be honored with the Writers Guild of America, East’s Ian McLellan Hunter Award for Career Achievement at the 75th Annual Writers Guild Awards at New York’s Edison Ballroom on Sunday, March 5, 2023.

The Hunter Award was established in 1992 and named in memory of longtime WGAE member Ian McLellan Hunter. The award is presented to a WGAE member in honor of their body of work as a writer in motion pictures or television. Past recipients include Robert Benton, Tom Fontana, Geoffrey Ward, Andrew Bergman, John Sayles, Ruth Prawer Jhabvala, John Waters, Richard LaGravenese, Nora Ephron, Walter Bernstein, and Claire Labine.

Michael Winship, President of the Writers Guild of America, East, said, “For nearly forty years, Spike Lee has written and directed some of the most meaningful and creative films in cinema. With a unique ability to challenge, entertain, and inform, his narratives spotlight the racism and bigotry that too often have defined the Black experience in America. Spike Lee is a moviemaker and storyteller greatly deserving to be honored with the WGA East’s Hunter Award for Career Achievement.”

Spike began his storied career as a writer/director with the hit independent films “She’s Gotta Have It,” “School Daze,” and the classic “Do the Right Thing,” which earned him his first Academy Award nomination for Best Original Screenplay. He followed up “Do the Right Thing” with “Mo’ Better Blues” and “Jungle Fever,” before going on to co-write and direct one of the most important films in Black cinema, “Malcolm X,” based on The Autobiography of Malcolm X by Alex Haley and Malcolm X.

With an incredible work ethic, Spike would continue to turn out memorable screenplays for films like “Crooklyn,” “Clockers,” “He Got Game,” “Summer of Sam,” “Bamboozled,” “She Hate Me,” “Red Hook Summer,” “Da Sweet Blood of Jesus,” “Chi-Raq,” and, most recently, “Da 5 Bloods.”

In 2018, Spike co-wrote and directed “BlacKkKlansman,” which earned him his first Writers Guild Award nomination and his first Academy Award-win for Best Adapted Screenplay. He would follow-up the film with his first television series “She’s Gotta Have It,” based on his celebrated debut film.

Among his many accolades, in 2015, Spike became the youngest ever recipient of an Honorary Academy Award for his contributions to filmmaking. In addition, his films “Do the Right Thing,” “Malcolm X,” “She’s Gotta Have It,” and the documentary “4 Little Girls” were selected by the Library of Congress for preservation in the National Film Registry for being “culturally, historically, or aesthetically significant”.

For media inquiries about the 2023 WGA New York show, please contact Jason Gordon in the WGAE Communications Department at (212) 767-7809 or email: jgordon@wgaeast.org.

For media inquiries about the 2023 WGA Los Angeles show, please contact Bob Hopkinson in the WGAW Communications Department at: (310) 801-8563 or email: rhopkinson@wga.org.