The Dodo Unionizes with the Writers Guild of America, East

The Dodo Unionizes with the Writers Guild of America, East 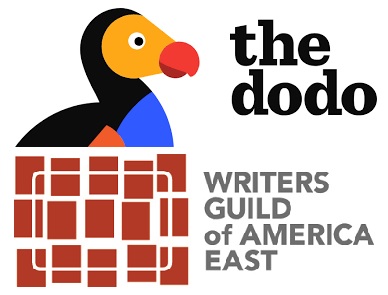 NEW YORK, NY (April 30, 2018) — The editorial, video and social staff at The Dodo have unionized with the Writers Guild of America, East (WGAE). A clear majority of the 46-member staff have signed union cards and called on management to voluntarily recognize the Guild as its collective bargaining representative.

The Dodo, a popular website dedicated to showing love and compassion for animals and animal-related causes, follows fellow Group Nine Media site Thrillist in unionizing with the Writers Guild of America, East.

Lowell Peterson, Executive Director of the Writers Guild of America, East, noted, “People who craft content for digital media continue to embrace collective bargaining as a means to bring stability and sustainability to their careers.  Working with the WGAE has won economic gains, workplace protections, and a seat at the table with management for these hard-working professionals.

The Dodo Unionizing Committee issued the following statement explaining why they are organizing:

The video, editorial, social and content acquisition staffs of The Dodo are proud to announce we are unionizing with the Writers Guild of America, East. The digital media landscape is growing at an unprecedented pace and The Dodo remains committed to leading the conversation in one united voice. As our company rapidly grows, union protections are some of the most effective mechanisms we have as employees to remain empowered as workers and valuable contributors to the company’s continued success. We are excited to join our Group Nine peers at Thrillist as union colleagues and to take the next step in The Dodo’s evolution.

The Dodo is committed to helping audiences make emotional connections to animals, from our family pets to the most endangered species throughout the world. As storytellers, we strive to entertain and inform; to honor heroes working tirelessly in the field; and to inspire people to take positive action in an animal’s life. We are the number one animal brand on social media, with billions of content views that have led to a measurable impact in the real world, and we’re preparing to enter the realm of television. As an advocacy leader, we have a responsibility to ourselves, our subject matter and our audience to be as transparent as possible in our processes and ensure that our mission is reflected in every decision made.

By organizing, we will codify a set of values that preserve The Dodo’s workplace as an open, progressive, and collaborative environment. Here are a few of the issues we are eager to address as a union:

Transparency. Honest communication between management and employees is essential to bolstering morale and producing the best creative work possible. Major decisions that affect the future of The Dodo must be communicated in an open, ongoing dialogue so that the staff has agency over their growing job responsibilities.

Editorial standards. As branded content and advertising expand their foothold in our revenue model, we must establish protocols that balance our business and editorial interests. To guarantee that our commercial needs never come into conflict with our mission, we must create and uphold a rigorous system of internal accountability.

Diversity. In order to promote values like respect and compassion, we need to reflect those values through an inclusive workforce that mirrors the diversity of our audience. It is vital to provide a safe and collaborative workplace where every employee is treated equally and to build concrete pathways of opportunity for underrepresented voices and perspectives.

Guidelines around performance, disciplinary action and severance. As a large, collaborative production lab, individual performance must be judged clearly, consistently and with diplomacy. Guidelines will prevent unnecessary disciplinary situations or terminations as well as provide acceptable severance packages, should the need arise.

We deeply believe in the mission of The Dodo and cherish the shared working experience we have cultivated as a team. Our office is one of the best places to work in the industry, and this union will foster a democratic process in which every employee has an equal voice. We look forward to joining you at the table and continuing the conversation.