The Intercept Unionizes with the Writers Guild of America, East 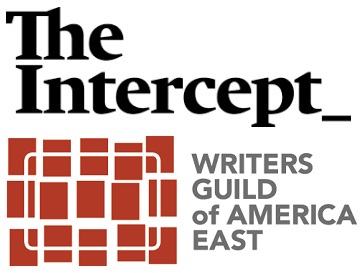 The Intercept’s decision to recognize the union came after a card check confirmed that a majority of The Intercept’s staff signed cards with the Writers Guild of America, East.

“The people who create content at The Intercept challenge the powerful by uncovering the truth.  In this strange new era, we watch the powerful attack the idea that truth means anything at all, and digital journalists find themselves on the forefront of the resistance,” said Lowell Peterson, Executive Director of the Writers Guild of America, East. “We are pleased that the content creators at The Intercept have joined with the WGAE to build their own power, to negotiate a collective bargaining agreement that addresses their needs and strengthens their voice.  We look forward to working with them and with the thoughtful, progressive management at this essential media enterprise.”

The Intercept’s Editor-In-Chief Betsy Reed noted, “We recognize and fully respect the right of employees everywhere — including digital media outlets like ours — to seek union representation.  We look forward to working with the WGAE, representing members of The Intercept’s editorial staff, toward a collective bargaining agreement.”

As reporters, researchers, editors, developers, and designers, we believe deeply in The Intercept’s founding mission, to hold “the most powerful governmental and corporate factions accountable,” and we recognize the tremendous lengths to which our leadership has gone to ensure we have the editorial independence and legal protections to uphold this vision. Three years after The Intercept’s official launch, with freedom of the press under direct attack from the Trump administration, it is an appropriate time to take new steps to strengthen our workplace culture and worker protections to better ensure fulfillment of the principles that guide our journalism.

By signing cards, we have voted to form a union, represented by the Writers Guild of America, East, and today First Look Media, The Intercept’s parent company, voluntarily agreed to recognize our unit after a card check. History demonstrates that journalists can most effectively defend the First Amendment by uniting with their colleagues, and we are proud to stand together with other digital newsrooms represented by the WGAE — among them ThinkProgress, Salon, Vice, Gizmodo Media Group, Fusion, The Root, MTV News, Thrillist, and the Huffington Post. We also understand the seriousness of the Trump administration’s threats to the economic and physical security of workers in all industries, and today stand in solidarity with them.

We look forward to collaborating with The Intercept’s leadership on strengthening internal communication and transparency and hope to create new forums for staff members to contribute to the organization’s editorial direction. We are eager to make our workplace more inclusive of under-represented voices and to develop practices that promote a more diverse staff and audience. As our publication grows alongside our parent company, First Look Media, we seek to establish transparency and channels for input on how the two will work together and how for-profit ventures will fit into the work of our non-profit.

There is a lot that we value about our workplace culture, but many of us have experienced firsthand how volatile this industry can be, and how protections that appeared to be guaranteed can suddenly evaporate. Our newsroom has always been unorthodox in its structure, with staff working on projects across multiple time zones. While maintaining the flexibility that helps us thrive, we seek to formalize fair standards and protections to help us produce our strongest work in the days ahead.

With official hostility to core First Amendment principles reaching a fever pitch, it’s essential that we unite with our colleagues in other newsrooms in order to protect our values. Unions have long played an important role in holding governments and corporations accountable. It’s only fitting that we should carry on that tradition at The Intercept.