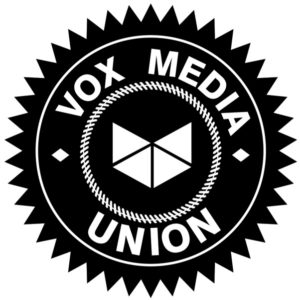 The 11th-hour agreement came after six months of bargaining that saw 95% of the unit sign a strike pledge, and the WGAE Council unanimously authorize a strike if a deal was not reached before the unit’s first contract expired on June 13. Vox Media management received nearly 7,000 letters of support from Guild members, union allies, and readers of the sites. In addition. the  unit also took extensive action on social media and on the company’s Slacks to push for a fair deal.

The agreement also includes equal pay language that triggers a Company investigation if an employee is found to be paid 15% below the average for a job at each vertical.

The contract also sees a 10% cap for year-over-year premium increases, locks in at least 3% 401k match, develops a policy on critical healthcare that will include abortion access and gender-affirming care, and codifies WPATH trans healthcare.

Further, the contract guarantees five months of parental leave, enhanced severance packages over the first contract with a 12 week minimum, eliminated use of NDAs for harassment or discrimination, and new successorship protections.

The Vox Media Bargaining Committee said, “After six months of bargaining, we’re thrilled to have ratified our second collective bargaining agreement, which we believe to be a truly industry-leading contract that secures so much for our members. This contract would not have been possible without the incredible solidarity we saw from our more than 360 members, who held management’s feet to the fire, and were prepared to strike on June 13 if we didn’t get a deal. We often hear from members that the union was what made them want to work at Vox Media, and we’re so proud of this contract that has secured the wage increases and benefits that all of our members deserve.”

Lowell Peterson, Executive Director of the Writers Guild of America, East, said, “The whole Guild stood in solidarity with our members at Vox, who were prepared to demonstrate their commitment to making real gains. This agreement proves the power of collective action.”

ABOUT WRITERS GUILD OF AMERICA, EAST
The Writers Guild of America, East, AFL-CIO (WGAE) is a labor union representing writers in film, television, broadcast and streaming news, and online media. The Guild negotiates and administers contracts that protect the creative and economic rights of its members; conducts programs, seminars and events on issues of interest to writers; and presents writers’ views to various bodies of government. For more information on the Writers Guild of America, East, visit wgaeast.org.