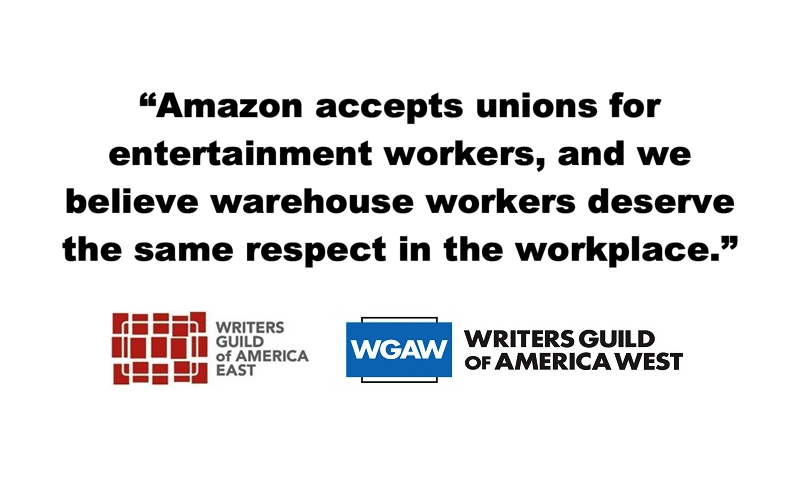 NEW YORK and LOS ANGELES (February 26, 2021) –  Tina Fey (MR. MAYOR), Alfonso Cuarón (ROMA), and Damon Lindelof (WATCHMEN) are among the more than 1,760 members of the Writers Guild of America, East (WGAE) and Writers Guild of America West (WGAW) to sign a petition supporting Amazon warehouse workers in Bessemer, Alabama who are voting to form a union with the Retail, Wholesale and Department Store Union (RWDSU).

The petition, which was sent today to leadership at Amazon.com, Inc., reads:

Amazon warehouse workers in Bessemer, Alabama are voting to form a union with the Retail, Wholesale and Department Store Union (RWDSU).

We are the writers of feature films and television series. All of our work is done under union contracts whether it appears on Amazon Prime, a different streaming service, or a television network.

Unions protect workers with essential rights and benefits. Most importantly, a union gives employees a seat at the table to negotiate fair pay, scheduling and more workplace policies.

Amazon accepts unions for entertainment workers, and we believe warehouse workers deserve the same respect in the workplace.

We strongly urge all Amazon warehouse workers in Bessemer to VOTE UNION YES.

A copy of the petition with all signers can be found here.