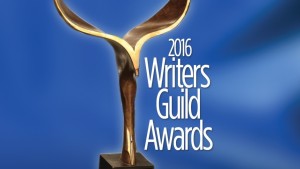 Submissions will be accepted from September 1 through November 23, 2015, with videogame nominees set to be announced January 11, 2016.

*   Submitted games must have separate credit for writing (i.e., Written By, Story By, Writer, Story Designer, etc.). While there is no limit on the number of credited writers a particular game may have, credits not specifically tied to videogame writing are not acceptable (i.e., Lead Designer, Designed By, Produced By, etc.). *Note: Writers of source material are not eligible for awards consideration.

*   All submissions must be made in the name of the credited writer(s), and not the game itself. Scripts may also be submitted by the developer/publisher of the game, or by writer representatives, i.e., agents, managers, and publicists. Entries submitted by anyone other than the writer(s) must include an entry form signed by the submitting writer(s).

*   At the time the script is submitted, credited writer(s) of the game must be, or apply to become, a member of the WGA’s Videogame Writers Caucus.

*   Work that was not produced under WGA jurisdiction may be submitted.

Recent WGA Videogame Writing Award winners include THE LAST OF US: LEFT BEHIND (2015) and THE LAST OF US (2014), both Written by Neil Druckmann; ASSASSIN’S CREED III: Liberation, Scriptwriting by Richard Farrese, Jill Murray (2013); and UNCHARTED 3: DRAKE’S DECEPTION, Written by Amy Hennig (2012).

The WGA’s Videogame Writing Award will be presented – along with film, TV, news, and other categories – at the 2016 Writers Guild Awards on Saturday, February 13, 2016, at simultaneous ceremonies in New York City at the Edison Ballroom and in Los Angeles at the Hyatt Regency Century Plaza.

Further inquiries regarding the WGA’s Videogame Writing Award may be directed to Dana Weissman in the WGAE Awards Office at (212) 767-7835, email: dweissman@wgaeast.org or to Jennifer Burt in the WGAW Awards Office at (323) 782-4569, email: jburt@wga.org.

The Writers Guild Awards honor outstanding writing in film, television, new media, videogames, news, radio, promotional, and graphic animation categories. The awards will be presented jointly at simultaneous ceremonies on Saturday, February 13, 2016, in New York City at the Edison Ballroom and in Los Angeles at the Hyatt Regency Century Plaza. For more information about the 2016 Writers Guild Awards, please visit www.wgaeast.org or www.wga.org.