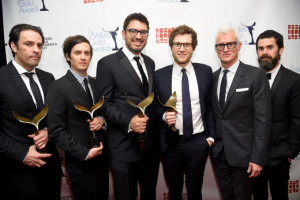 The Big Short, Screenplay by Charles Randolph and Adam McKay; Based on the Book by Michael Lewis; Paramount Pictures

“Back to Reality” (Weight), Written by Daryn Strauss; weighttheseries.com

“The McCarthys and Under the Dome Promos,” Written by Erial Tompkins; CBS

*There were no nominees in the Television Graphic Art and Animation category this year.

The Writers Guild of America, East presented honorary awards throughout the ceremony. Senator Al Franken was presented with the Evelyn F. Burkey Award, which celebrates a person who has brought honor and dignity to writers, by fellow original Saturday Night Live writer Alan Zweibel. Tony Goldwyn (Scandal) presented Richard LaGravenese with the Ian McClellan Hunter Award for Career Achievement, celebrating a body of work that includes The Fisher King, Behind the Candelabra and P.S. I Love You. Four-time Writers Guild Award winner Melissa Salmons was presented with the Richard B. Jablow Award for her devoted service to the Guild by last year’s award recipient Jeremy Pikser (Bulworth).

For more information about the 2016 Writers Guild Awards, please visit www.wga.org or www.wgaeast.org.