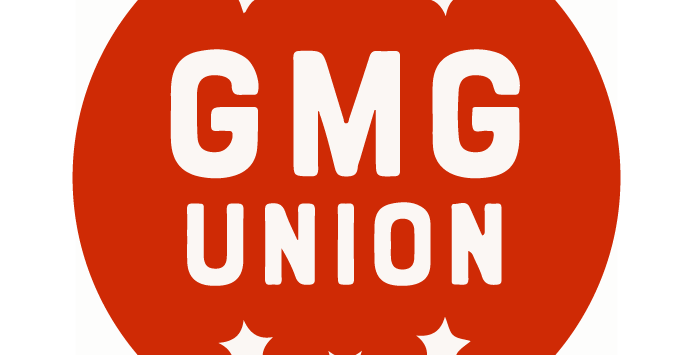 In March 2019, the editorial staff at Gizmodo Media Group unanimously ratified their second collective bargaining agreement with the WGAE (click here to read it).
The new three-year contract includes:

Gawker approved its first contract on Tuesday, March 1, 2016, voting 88-2 in favor of the contract, with 90 out of 99 members of the bargaining unit casting a vote (click here to read it). The union contract settled with Gawker in March 2016 lives on as the first Gizmodo Media Group contract.

The editorial staff at Gawker Media voted overwhelmingly to unionize with the WGA East on June 4, 2015, becoming the first major digital media newsroom to form a union and setting off a wave of organizing across the industry.
The editorial, video, and social media staff at Fusion (later known as Splinter) had already begun to organize when its parent company, Univision, bought Gawker Media in August 2016, shuttering the flagship site, Gawker.com, and maintained the remaining sites under Gizmodo Media Group (GMG).
Two months after the acquisition, Fusion staff announced that they were forming a union; management responded with an anti-union email and a series of anti-union meetings, refusing to recognize the union. On November 10, 2016, Fusion staff voted to form a union and demanded voluntary recognition from Univision.
At the end of that year, the company announced a massive corporate-wide restructuring that included merging Fusion and The Root into Gizmodo Media Group. As part of the merger, Fusion and The Root employees became GMG employees effective January 1, 2017.

Meanwhile, in October 2016, editorial staff at The Root (which Univision had acquired in May 2015) signed union cards, unanimously affirming their support for unionizing and demanding voluntary recognition.

GMG Union is the product of three separate organizing campaigns at Gawker Media, Fusion, and The Root, which joined under the same heading after Gawker and The Root were acquired by Fusion’s parent company. Each of the three sites’ original Why We’re Organizing letters are below.

Members of the Gawker Union wrote about why they believe it’s time to unionize:
The online media industry makes real money. It’s now possible to find a career in this industry, rather than just a fleeting job. An organized work force is part of growing up. I fully expect that Gawker Media will emerge from this experience stronger than it has ever been.
– “Why We’ve Decided to Organize”, Hamilton Nolan
Digital media is no longer just burgeoning. It’s thriving, and now is the time to assert our right to organize.
– “It’s Time to Organize”, Adam Clark Estes

Fusion’s mission statement says, “We champion a young, diverse, and inclusive America from the inside out.” We are incredibly proud of the work we’ve done as individuals and as a publication in pursuit of that mission. That’s why we, collectively, would like a seat at the table in charting the future direction of Fusion and our role within the organization. Because we deeply believe in this mission and the ideas espoused in our inclusive body of work, we decided to organize a union with the Writers Guild of America, East.
Fusion has produced an impressive body of work about how the right to organize is critical for American workers. It’s time we practice what we preach. It’s important that this process is transparent and democratic, and we want anyone involved to be able to participate in the conversation about unionizing. This is just the beginning of that process and so to begin the public conversation, here are some of the reasons why we are unionizing.
Compensation & Pay: We seek to establish an equitable and transparent compensation policy, including salary minimums for all positions and a standard for raises.
Newsroom Communication & Transparency: In the world of digital journalism, job responsibilities can sometimes change very quickly. We are all aware that news relevant to our audience sometimes happens after hours or over the weekend, and we’re eager to make sure we’re covering it well. However, it is important to clearly communicate shifts in editorial structure, priorities, and individual responsibilities.
Establishing Standards for Hiring, Firing and Disciplinary Actions: We should have clear standards and procedures in place for judging performance. Negotiating a union contract is a way to set and enforce clear standards, as well as a way to avoid inequitable disciplinary procedures or terminations without just cause.
Diversity: It’s clear this is an area our company performs better in than most, but we want to formally preserve Fusion’s commitment to diverse hires. We would like to explore clear and distinct processes by which our company seeks to increase and maintain the diversity of its employees and ensure more opportunities for women and people of color to advance within the company.
Employee advancement: We seek a clear process by which an employee can begin on the path to advancement. We also seek to establish regular training programs whereby employees can learn new skills and share their own institutional knowledge with each other.
Editorial Freedom and Independence: We think that Fusion can be of the greatest service to its audience when journalists have freedom to pursue stories without fear of undue influence, intervention, or retaliation. We seek to establish clear policies on discipline and termination, as well as create mechanisms for staff to participate in crafting editorial policy.
Sustainable Career Paths: We seek to negotiate a contract that gives Fusion employees access to programs to build a sustainable career, such as but not limited to supportive family leave policies, protecting paid time-off policies and preserving and protecting benefits like healthcare and retirement.
Next Steps: We have formed an organizing committee to work on building our union. You are encouraged to join with us. If you want to get more involved or have questions, you can contact us at fusionstaffunion@gmail.com and one of us will get in touch.
In Solidarity,
The Fusion Union Organizing Committee

The Root’s mission has always been to champion the voice of marginalized African Americans. As a publication, we not only report on those who are often underreported, but we investigate, cheer, encourage and explore the ways in which the playing field can and should be evened. At The Root, we have always prided ourselves in being a small, intimate website that competes with bigger publications. We have always considered the work that we do to be a cumulative effort as we are all on the same team. Because we all believe in the potential, direction, and vision of The Root, we want to ensure that we have a voice in the process and so we are organizing a union with the Writers Guild of America, East.
This is not a declaration of war. We love The Root. It was the great James Baldwin, who once said, “I love America more than any other country in this world, and, exactly for this reason, I insist on the right to criticize her perpetually.” We would like to consider this public statement the beginning of a continual dialogue in which we all work together to make the organization better. We believe through transparent practices, and continuous communication we will create a harmonious and productive work environment for all. Below are some of the reasons we believe that a union is vital to this process.
Compensation & Pay: We seek to establish a transparent and equitable salary structure , which would include salary minimums and a standard for raises and bonuses.
Newsroom Communication & Transparency: We know that job responsibilities may change. We also know that because we are a small staff we may have to jump in and assist with several tasks as they are assigned. What we’d like to establish is a clear set of requirements for each job title that includes expectations and individual responsibilities. We should also have clear notification of jobs as they become available throughout Fusion Media Group (FMG).
Competitive Health care: We seek the opportunity to choose between at least two competitive health plans that are conducive to our diverse medical needs, while continuing to build on supportive family leave policies, protecting paid time-off policies and preserving retirement.
Employee advancement: We seek a clear process for advancement within the organization. We also seek access to training programs, and dialogue with employees throughout FMG so institutional knowledge can be shared.
Next Steps: We have all signed union cards expressing our choice to form a union with the Writers Guild of America, East. We expect that the company will respect that decision, recognize our union and take next steps towards collective bargaining. We look forward to continuing to work together to ensure that The Root is a just and equitable workplace.
In Solidarity,
The Root Editorial Union