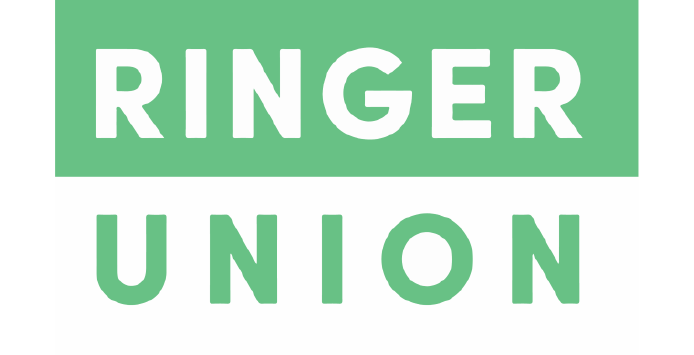 In April 2021, the 65 members of the bargaining unit at The Ringer unanimously voted to ratify their first contract—and, what’s more, the staff union at fellow podcast company Gimlet (who were at the bargaining table at the same time as The Ringer) unanimously ratified theirs just a few days earlier. Highlights from the contract include, for example: significant increases to salary minimums; limitations on the use of contractors within bargaining unit positions; as well as guarantees for severance, health care, and diversity; in addition to just cause and union security. You can find more details on both the Ringer contract and the Gimlet contract here. You can also read the full contract.

The Ringer staff union announced they were organizing in August 2019, and won voluntary recognition from management soon after that. You can read more about the recognition & negotiations here — as well as in the New York Times.

The Ringer is proud to announce that we have formed a union with WGA East and are standing with the thousands of other digital professionals in the media, podcasting, and video worlds who have recently organized.

By unionizing, we hope to strengthen our already amazing workplace culture and ensure that everyone who works at The Ringer, from video to editorial, from senior staffers to entry-level hires, receives necessary support, protection, and fair compensation. Here are some of the issues we’re discussing:

We want everyone at The Ringer to earn a living wage and receive fair overtime pay. We hope to define clear salary minimums for each position, close any race- or gender-based gaps that may exist, and establish a consistent performance review and raise system.

We also want to clarify, standardize, and strengthen benefits, including parental leave, sick leave, disability leave, and the creation of 401ks.

We feel strongly that the best content is created by a diverse staff and want to create standards to ensure The Ringer hires and promotes people from underrepresented communities.

We work in a volatile industry and want to have long futures at The Ringer. We seek a severance policy with a guaranteed minimum that scales up in accordance with time served at the company.

Maintaining open communication between employees and management is crucial to fostering a healthy workplace. This includes clear, accurate job descriptions and titles, responsibilities, and an org chart.

We are proud of the work we do at The Ringer. Creatives on staff should have more control over their intellectual property, receive revenue sharing when applicable, be allowed to contribute elsewhere, and be properly credited for their multimedia work.

We look forward to discussing these and other issues with the same collaborative, forward-looking spirit that drives our work every day. Together with management, we hope to establish a strong foundation for both the present and future of The Ringer; one that empowers employees and enables them to continue to create the best possible work.

Back to top
Back To Nonfiction Podcast Shops