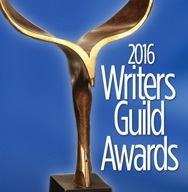 Feature films eligible for a Writers Guild Award were exhibited theatrically for at least one week in Los Angeles during 2015 and were written under the WGA’s Minimum Basic Agreement (MBA) or under a bona fide collective bargaining agreement of the Writers Guild of Canada, Writers Guild of Great Britain, Irish Playwrights & Screenwriters Guild, or the New Zealand Writers Guild. Theatrical screenplays produced under the jurisdiction of the WGA or an affiliate Guild must have been submitted for Writers Guild Awards consideration.

Documentaries eligible for a Writers Guild Award featured an onscreen writing credit and were exhibited theatrically in Los Angeles or New York for one week during 2015. Theatrical documentaries must have been produced under the jurisdiction of the WGA or an affiliate Guild to be eligible for awards consideration.