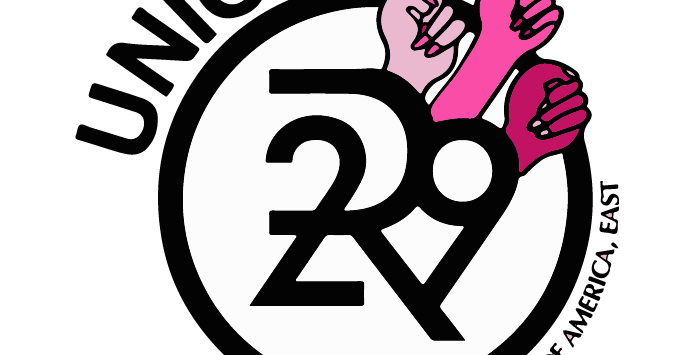 In November 2019, VICE Media acquired Refinery29 in a $400 million deal. In December, Refinery29 reached an agreement for its 40-member editorial staff to work under the collective bargaining agreement negotiated by VICE Media and the Writers Guild of America, East in January 2019.
Read more about the agreement here.

The Refinery29 staff union with the WGA East was voluntarily recognized by management on January 25, 2019. Read more about it here.

The editorial staff of Refinery29 is excited to announce we’re unionizing with the Writers Guild of America, East. As the next-gen media and entertainment company, Refinery29 is a unique and necessary voice for women all across the world. As employees, we are encouraged every day to feel, see, and claim our power. The values that Refinery29 has instilled in us from day one — Imagination, Individuality, Inclusivity, and Impact — have encouraged us to come together and organize in hopes that Refinery29 can continue to grow and achieve its greatest potential.
Every day we watch our coworkers, a majority of whom are women, make contributions and execute ideas that make Refinery29 unlike any other media outlet — but that doesn’t mean we are immune to the challenges our industry is currently facing. By organizing, we hope to protect our progressive, creative, and fearless spirit by giving employees a seat at the table, including during the times when Refinery29 must decide how it will adapt to the shifting media landscape. Additionally, we want to ensure our voice comprises diverse, fairly-paid and excited employees, who have no trouble seeing a future at the company.
In recent years, fellow digital media companies have been strengthened by their employees’ decisions to unionize. We are excited to join our peers at Fast Company, Gizmodo Media Group, HuffPost, MTV News, Onion Inc., Salon, Slate, Talking Points Memo, The Dodo, The Intercept, ThinkProgress, Thrillist, VICE, and Vox Media in their efforts to preserve their newsrooms.
We are proud of working at an outlet that believes in encouraging women to challenge the status quo, in their lives and in the world. We believe that unionizing is the best way, and the feminist answer, to address our workplace issues. This way we’ll be able to continue publishing stories and creating content that serve as a catalyst for women to see, feel, and claim their power. We hope that Refinery29 will voluntarily recognize our union and that together we can begin building a stronger and more equitable organization that will inspire women for years to come.

Specifically, we plan to address:

Transparency
Refinery29 makes a good-faith effort to keep employees updated and often provides open forums for employees to ask questions and be part of the conversation. However, when it comes to times of change, growth, or shift, we need to have a seat at the table. As a union, Refinery29 employees will have a say when it’s time to talk about our future.
Diversity
There is nothing Refinery29 champions more than the necessity of diversity in our coverage and our world. We hope to work with management to strengthen Refinery29’s already inclusive spirit, putting an intentional focus on both hiring people from historically underrepresented communities and on promoting these employees within the company. This also requires formal processes for acknowledging and rectifying when the company falls short of embracing our radical inclusivity value.
Security
Once hired at Refinery29, we want employees to feel at home and visualize a long future with the company. However, the promise of a future can only be sustained with clear paths of growth, fair and matching compensation and clear severance plans.